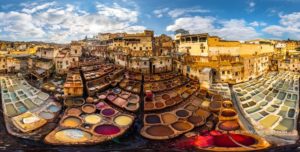 When you think of Africa, many people think about rich, lush forests filled with gorillas or the Serengeti Plains where you can watch giraffes run free against a setting sun. While these images are certainly iconic to the overall image of the African continent, there is a whole other layer of Africa that many people don’t think to explore. Saharan Africa is some of the most wonderful and unique regions of the world allowing visitors a look at real Middle Eastern culture without having to travel to the Middle East. So which country should you check out? Read ahead to learn more about Morocco and why it’s the best Saharan African country for travellers of all levels of experience.

Morocco is a coastal country nestled in the northwest corner of Africa, bordering Algeria as well as contested Western Sahara, which borders Mauritania. Morocco is home to the Atlas Mountain range which is a vast series of gorgeous mountains and foothills that stretches through much of central Morocco. The coastlines of the Mediterranean to the north and the Atlantic to the west have a curious collection of villages and towns which offer respite from the heat of the interior. As a majority Muslim nation, mosques are found throughout – often a beautiful and picturesque image of an oasis town with towering minaret jutting from date palms amid the rocky and unforgiving craggy cliffs of the Atlas.

The Cities – Fes and Marrakech

The two most popular cities of Morocco are Fes and Marrakech – still somewhat rivals in their fight to be top dog among travellers, but each with their own unique things to see and do. Fes is well known for its intricate network of alleys and streets that crisscross each other tightly, adding to the ambience of the city. Be sure to check out the leather tannery – where men work in the hot sun beating and dying animal skins to create the leather that Fes is famous for. In Marrakech, the Jema el Fnaa square adjacent to their network of tightly packed souk markets is the place to be at nightfall when the residents all congregate for night markets and alfresco dining. In both cities be sure to seek out traditional hamamms – steam baths and subsequent body scrubs that leave you squeaky clean.

Morocco is also home to a number of towns and villages that offer up unique experiences and fantastic beaches. Essouira in the southwest is a great beach town that has a bustling network of markets and was the filming location for part of Game of Thrones. Chefchaouen in the north is known for its walls and buildings painted blue hues – a unique and interesting town to visit for many who also want to get away from the heat of the bigger cities for a while.

There you have a quick rundown on Morocco – easily one of the most unique and enjoyable as well as welcoming countries in all of Africa not just the Saharan region. So pack your bags and take advantage of this opportunity to get a taste of the Middle East without having to travel there.