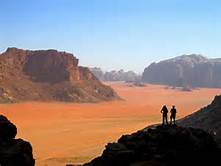 Almost everyone who travels as a serious hobby or for work will tell you that it’s their dream to go to a Middle Eastern country. Sadly with all the conflict that goes off in the Middle East, many people are hesitant to check it out, but some countries are as safe as can be and welcoming to boot. One such country is Jordan – an absolute jewel of the region, home of a number of stunning natural wonders, ancient villages and wonderful weather. Read ahead for three things you have to see in Jordan.

This is a given for anyone visiting Jordan. Located in Jordan’s southwestern desert, this ancient city was the capital city of the Nabatean Kingdom and is a series of buildings carved out of cliff faces. Due to the fact they have been carved right out of the cliffs themselves, the entire city takes on a rose gold coloured hue which has given Petra the nickname “the Rose City”. Many people are mistaken in believing the huge facade known as the Treasury is the sole attraction in Petra, but Petra is actually the entire city which can be explored. You can also head off into the bush on a tour with locals for some really unique views.

Wadi Rum is a huge swathe of gorgeous desert comprised of cliffs and rock formations in the deep south of Jordan near the border with Saudi Arabia. It’s a protected wilderness region and is home to numerous ancient rock carvings in the various formations found throughout this vast expanse of desert. Sunset and sunrise are particularly impressive in Wadi Rum, with the hills and rock formations almost coming to life in deep hues of reds and oranges. For a truly unique experience, take a hot air balloon tour of the region and be left breathless at the commanding views.

The Dead Sea is a highly salty body of water that sits between Israel and Jordan and is a popular site for holidaymakers, sun seekers and more who come for the seas healing properties. The Dead Sea is world renowned for its intense mineral properties as well as being the world’s lowest point on dry land. It’s a beautiful region with many oases and small villages dotted around and the swimming is enjoyable with the hyper salinity of the sea making it easy to float in the water. Regardless of the other things you have planned for Jordan, the Dead Sea with its history and significance to the area is an important and unforgettable place to go. Make sure you pick up some of the local Dead Sea Mineral products before you leave to take a bit of the miraculous sea home with you.

So there you have the top areas you should check out on any trip to Jordan. On top of this there’s also the extreme southern coast of Aqaba and the city of Amman which is worth a visit as well. It’s easy to see why Jordan continues to impress and delight travellers to the region time and again.