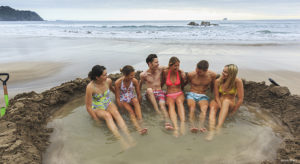 New Zealand is often considered the Canada of the Southern Hemisphere, mainly due to its residents laid back attitudes alongside its truly stunning beauty that rivals that of Canada’s own. This unique stretch of islands is home to some of the world’s most interesting wild and plant life and is likewise home to gorgeous coves, mountains, hills and plains. In short, if you want the best travel experience possible, New Zealand is the best place for anyone to head to. So what are the top places to check out? Read ahead to find out…

Queenstown is a gorgeous little cove town surrounded by snow topped mountains. It has the feel of an alpine ski resort on lake with some great accommodation and dining options that have stunning views. The region is well-known for its adventure sports, prime for adrenaline junkies who can take part in bungee jumping off the Kawarau Gorge Suspension bridge, jet boating down the major rivers, and other various watersports. In the winter the mountains offer some spectacular skiing to top off the trip to New Zealand’s South Island.

Only 175 kilometres from Auckland, the Hot Water Beach on Mercury Bay is a huge tourist draw which allows visitors the ability to dig their own hot pools of water in the sand, from where hot spring water filters up from beneath. The beach is considered to be one of the most visited locations in the region and annually it’s estimated that around 700,000 people – both locals and tourists alike – visit this particular beach. The only downside is the potentially dangerous rip tides and sudden strong waves, so if swimming on the beach, swim with caution and check tide times.

As far as capital cities go, Auckland is one of the best. The city is filled with parks, interesting sights and a deep, rich history. Be sure to stroll up and down Karangahape Road, also known as K-Road which is known for its bars, restaurants and cafes. For a kitschy choice, be sure to head to Ponsonby – an area of Auckland with artsy cafes and bars, cool outdoor venues and more. For a truly unique and awe inspiring experience, head to the Maungawhau Crater, also known as Mount Eden – a volcanic cone and grass filled crater which offers some amazing views of the surrounding city. Another interesting place to check out is the Old Mount Eden Prison – a two hundred year old building that was originally built as a military stockade, then used as a prison in later years. The building is no longer fit for purpose consistently, so now is used for other projects including filming locations as well as being a well-known site for protests.

So there you have a couple of great things to check out when you’re in New Zealand. With so many things to see and do stretched across the country, it’s easy to see why this country continues to be a favourite for travellers from across the globe. Come see for yourself – New Zealand awaits.