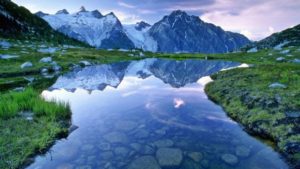 Most visitors to Canada will tend to stick to the typical tourist trail of Vancouver Island, Toronto area or maybe the Rockies. For most people this is sufficient for them to see what they want to see in the time frame they want to see it, but for those who like getting off the tourist trail a bit, Canada has a lot to offer. If you are considering a trip to the Great White North anytime soon, you need to check out the below stops along your way for a truly unique experience.

Most people who come to Canada seem to skip out on some of the central provinces like Saskatchewan and Manitoba. There isn’t a huge amount to see, and many people don’t necessarily come to these regions unless they have family or a pertinent reason to. One such reason is to visit Churchill, a small town in northern Manitoba, famed for its proximity and number of polar bear sightings. Churchill is regularly touted as the ‘Polar Bear Capital of the World’ and it even has its own passport stamp you can get in your passport at the local tourist office for a fee. If nature and wildlife are your thing, Churchill is right up your alley and one to definitely try to fit in.

The Province of Newfoundland and Labrador

Many visitors to Canada don’t consider the Maritime provinces as a hot spot to hit up and explore. The provinces are comprised of Prince Edward Island, Nova Scotia, New Brunswick and Newfoundland and Labrador. This last one in particular fails to see much in the way of tourism, especially from outside of Canada. With unique, European influenced cities like St John’s and rugged, stunning coastline on all sides, this is one province that is ideal for outdoor lovers. The island of Newfoundland can be driven end to end in about twelve hours, allowing visitors to start in St John’s in the morning and be in Port aux Basques on the other end within the same day. Small cove towns, beaches and some impressive alpine forests, as well as the UNESCO World Heritage Site of Lanse aux Meadows up near the small town of St Anthony makes this an unique and awe inspiring province to visit, and we haven’t even mentioned the inherent hospitality you’ll experience or the amazingly delicious province specific food like Jig’s Dinner or Toutons!

The Yukon Territory in Canada’s north west corner is a rugged, mountainous, alpine area that has few residents and even fewer visitors. In the winter the area is inhospitable and difficult to traverse, making it ideal for summer visitors. Be sure to check out the cities of Whitehorse and Dawson for some truly unique looks at history in the region, with Dawson being relatively unchanged from how it once appeared in Klondike times. To access it though, you will need to drive up a long, desolate highway that is prime for adventurers and truckers and you will be rewarded at the end with the Sour Toe Cocktail… a drink (alcoholic or non alcoholic) that has an old severed, mummified toe in it. If completed, you receive a certificate stating you completed the Sour Toe shot, a perfect reminder of such a strange but wonderful part of Canada.

So there you have a couple of great parts of hidden Canada. Canada is full of amazing things to see and do, and being the second largest country in the world means that it’s prime for exploration and finding something everywhere you go. Never underestimate the power of going off the beaten trail in a place like Canada – you never know what you will find.