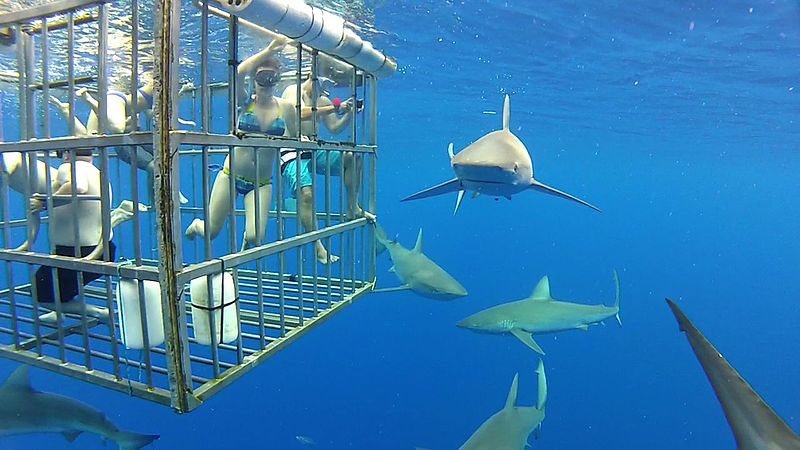 There are some people that take YOLO to the extreme. People have always found new ways to push the boundaries, but these 10 dangerous activities that no one should try go a little too far. Read here if you like living vicariously through others!

Most of us are content to make bucket lists that include visiting the Eifel Tower, vacationing in luxury, or being brave enough to sing karaoke to strangers.

Some people though have a whole new perspective on things to do before you die. They like to pick dangerous activities that might actually cause their death!

This list of ten crazy, adventurous things to do will hopefully give you some tips on activities to avoid if you want a long life.

If you’re up for one of those really dangerous activities, try swimming with the sharks. You can do this with tame, docile sharks, like whale sharks. You can also swim with baby sharks or other smaller sharks.

Or you can go all in by shark cage diving. The best location to see one of the most dangerous sharks, the Great White, is Seal Island in Cape Town, South Africa.

Hopefully, you won’t end up as a shark’s lunch, but you may get to watch a seal get chomped. That’s one of those things to do before you die.

2. Biking Across the Desert

No one really wants to be in the desert, but some people still want to bike across them.

There are so many things you have to take into account for this kind of trip. Water, temperature, distance, predators, and weather.

You could die from dehydration, heat stroke, flash floods, and poisonous animal bites to name a few. There are desert safety guides though if you feel like this is your adventurous thing to do.

There’s no arguing that waterfalls are a beautiful part of nature, but kayaking over them presents a whole new challenge.

There are few different techniques for going over a waterfall. The two main ones are boffing and penciling. Penciling means going into the water vertically. Boffing means landing flat or horizontally on the water below.

Either route you take, this is one dangerous activity. Many kayakers break their backs because of the impact when they hit the water flat. If you go in vertically though, your kayak can flip and hurt you worse.

People who visit Spain say bull running is a must see. However, it’s not a great idea to try it yourself! Most people who run with the bulls don’t get injured, but the few who are hit can be severely hurt.

Most people who die from this dangerous activity have a punctured lung. Getting hit by bulls’ horns in any place is going to hurt though.

You’d think jumping out of a helicopter would be enough of a thrill, but no. Some people want to land on a mountain to ski down.

There are a lot of risks involved in this dangerous activity. First, you have to trust your pilot and his ability to put you in a safe place.

Second, you have to jump out of a moving helicopter, which is pretty scary! Third, you have to land on your feet in order to ski yourself down. Otherwise, you may suffocate in the snow.

Finally, heli-skiing usually takes place in isolated and dangerous areas of the wilderness. Does this crazy stunt make your list of things to do before you die?

While the name implies walking on the wings of a plane, that’s actually not what happens. People are strapped to the outside of a plane and stay there throughout a flight.

The pilots also try to give you a thrill by making sharp turns and rolling the plane over. Scary enough for you? People usually don’t die from this risky activity, but you’d have to be just a little bit crazy to try it.

While we all remember doing the limbo at roller skating parties when we were kids, some people take this to the next level. In India, kids like to roller skate underneath cars by doing the splits.

Most often these cars are not in motion, but can you imagine doing this when the car is moving?! Talk about crushed limbs…

This tradition may not have started in Hawaii, but the kings there used it as far back as 1770.

One king required his soldiers to dive off the highest cliff they could find without making a splash in the water below. This proved their loyalty.

This is one of those dangerous activities that if you’re not required to do, you probably shouldn’t!

We hear about bungee jumping so much nowadays that it seems like a safe activity. Wrong! Many people are severely injured and some even die from bungee jumping.

The most common injuries are to the eyes, neck, and spine. This is because the rope jerks your body suddenly at the end, which is never good for your neck or spine.

Most people die from the cord tangling around their neck or from miscalculating the distance to the ground. You’re jumping from pretty high up, and if any part of your head hits the ground, you’re done.

Some people in Australia even like to take bungee jumping to a new level. They jump over rivers filled with crocodiles. Can’t crocodiles reach out of the water to grab prey?

All the same, this is one of those adventurous things to do that’s often worth the risks to some people.

While cave diving doesn’t sound like one of those adventurous things to do, it’s definitely up there.

Scuba diving usually gives you a taste for beautiful scenery and an experience with nature. Cave diving takes it even further by letting you enter a dark cavern that few people have ever seen.

It’s very dangerous because of how deep you’re traveling as well as the darkness. It’s difficult enough to find your way out of a dark hole on land when your air isn’t running out!

Around 400 people have died cave diving, but the numbers have gone down since certification is now required. Training courses also help people know what to do if something goes wrong.

All the same, this is still a risky activity to add to your list of things to do before you die.

Now that you know dangerous activities that could shorten your life, you might want to look at ways to lengthen it.

Check out this article on ways to open your mind and relax.